Synopsis
This will show you how to set the Vista for the actual CPU L2 cache memory size incase Vista fails to get it from the Hardware Abstraction Layer (HAL) and uses a default L2 cache size of only 256 KB instead of the actual size.

How to Set Vista for the CPU L2 Cache Memory Size​

Note
This sets the SecondLevelDataCache inside the registry.


Microsoft KB183063 said:
This is not related to the hardware; it is only useful for computers with direct-mapped L2 caches. Pentium II and later processors do not have direct-mapped L2 caches. SecondLevelDataCache can increase performance by approximately 2 percent in certain cases for older computers with ample CPU L2 memory (more than 64 MB) by scattering physical pages better in the address space so there are not so many L2 cache collisions. Setting SecondLevelDataCache to 256 KB rather than 2 MB (when the CPU has a 2 MB L2 cache) would probably have about a 0.4 percent performance penalty.
Click to expand...

Warning
Only set the value to what your processor actually has for the L2 cache size. Do not use a larger size than it actually has.

Find Out the L2 Cache Size Reported by HAL
NOTE: This will show you how to see what the L2 cache size is for your CPU as it is reported to Vista by HAL. This value will be used in STEP TWO below to set the SecondLevelDataCache value for this as a backup in case HAL rarely could not detect the L2 cache from the CPU. 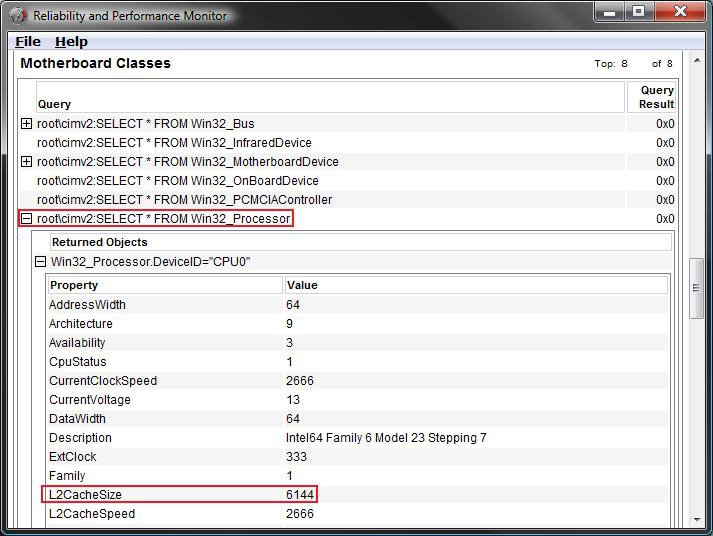 Set the L2 Cache Size
NOTE: This will set the SecondLevelDataCache value in the registry, from the value gotten in STEP ONE, as a backup in case HAL rarely could not detect the L2 cache from the CPU and prevent having only a default L2 cache size of 256 KB used as L2 cache size instead by Vista.

1. Open the Start Menu.​
​
2. In the white line (Start Search) area, type regedit and press Enter.​
​
3. Click on Continue in the UAC prompt.​
​
4. In regedit, go to: (See screenshot below)​
​
Code:
5. In the right pane, right click SecondLevelDataCache and click on Modify.​ 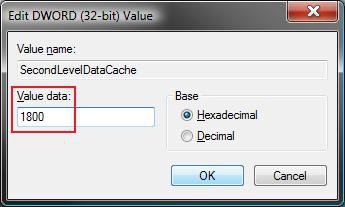 Vista Pro
Shawn I just thought id inform that for reson unknown to me the 4mb cache setting isnt 1600.

Its actually 1000. I am unsure as to why cause all the rest are correct.

Thank you.
Nice catch. It has been updated.

How do you determine L2 cache size to make these mods

You need to look up your CPU's specs to see that it says. Go to the manufacturer's website to do so.(EX: Intel or AMD) You can find the model number to look it up with by right clicking Computer (in Start menu) and click Properties. You can also find the model number in System Information.

Why, yes it will. It's a standalone EXE program. No need to install, just run the EXE. You can find the information under the CPU tab under Cache Level 2.

This means that you have 8 Mb shared cache between the 4 cores. You should use 2000 as the value. I updated the tutorial for this.

You can read more on your Intel Core 2 Quad Q6600 processor here:


Intel Advanced Smart Cache:
Shared Level 2 cache across each pair of cores that can be dynamically allocated to each processor core, within the pair can access data from fast L2 cache, significantly reducing latency to frequently used data and improving performance.
Click to expand...

setting this parameter in Vista will do nothing, because according to microsoft, when there is 0 in SecondLevelDataCache , HAL on startup detects the appropriate setting...

Yes, this is true. However, if Vista fails to retrieve the CPU L2 cache size from the Hardware Abstraction Layer (HAL) for some reason, it will use a default CPU L2 cache size of only 256 KB. This will most likely be less than what your CPU actually has. It can cause a slight performance drop if this happens.

anyhow, in my experience, most of the "tweaks" are eighter useles, or dangerous - like switching off the last access timestamping on ntfs, etc. those are all rather old tweaks from old times

Hi Brink, I was just wondering if this would be worth my while? When you have time let me know what you think. Thanks a lot.

I appreaciate your time.Bare Foot kid

Usually this will never make a difference. Only if for some reason Vista fails to read the HAL from the CPU. Even then, it would be a very low performance hit.

Hi Brink. I thought that was what you were saying. That's why I asked first. I do thank you for your response. Later, Bare Foot Kid