Vista Guru
Gold Member
I reinstalled Vista and have been reinstalling software.

I have one piece of software that required and tried to install .net framework 4.0 Client. It went on forever so I aborted it and downloaded and installed Client using the standalone installer. No problems. Software then installed.

I have another piece of software that required and tried to install .net framework 4.0 Full. As above, I ended up aborting the installation.

I downloaded the stand alone installer for .net framework 4.0 Full and ran it. It first tries to install the 4.0 Client which, of course, is already installed. I let it run for 3 hours yesterday and it never showed any "installation' progress. After a shutdown last night, I started the install again this morning. It's now about 2 hours and still no progress shown.

Anybody have any ideas? I am running it as administrator.

I used the Windows ISO from ex_brit and it appears to be fully up to date (there were a couple minor updates).

Vista Guru
Gold Member
Nobody wants to touch this one? I decided to install .net framework 4.5 on one of my new Vista installs. It ran well over 4 hours and the installation progress bar never moved.

My update history suggests that you should have received .NET Framework 4.5.2 (KB2901983) via Windows Update soon after reinstalling Vista SP2, assuming that (1) you are familiar with the workaround for the well-known issue with Windows Update, (2) you had set Windows Update to give you recommended updates, and (3) Microsoft has not changed or taken down the recommended version since I reinstalled Vista in 2015.

Much later, I manually installed .NET 4.6 (KB3045557), which replaced 4.5.2 in Programs and Features. My understanding is that .NET 4 is cumulative, so there should be no need to install earlier versions for specific programs. (If you believe that to be incorrect, what program and version?) It is probably best to install .NET before installing software that requires .NET.
____________

Please excuse me for going off topic; but if I am correct in thinking that you haven't installed any recommended updates, then you don't have Platform Update or IE9 either. If you haven't already done so, would you please attempt to install IE9 using the standalone installer (which I have never used). It might tell you "does not apply to your system" because you don't have Platform Update (which is a prerequisite) or it may include all of the prerequisites. In the latter case, I am very curious to know if it installs all four components of Platform Update (KB960362, KB971512, KB971513, KB971514), or just KB971512 (which is the only component listed as a prerequisite for IE9), and whether it installs the supplement (KB2117917). You would have to go to Installed Updates in order to determine that, and btw I would really appreciate a screenshot. Thanks!

Vista Guru
Gold Member
I used the ISO provided by ex_brit to reinstall Vista. After installation, there were 3 updates which were installed. Thats all it found since the installation. Strange thing is that I have Windows Update to download/install updates automatically and I've also asked it to check for updates but whenever I go there, it says I never checked for updates. I manually started it again a little while ago.

Like you, I've wondered why it wasn't installed since there were numerous updates to .net framework prior to the end of support and I had .net framework 4.03.... installed.

For S & G's, I tried to install the full version again a couple of days ago. I let it run for 12 hours and there was no progress shown in the progress bar so I aborted it.

You might want to start a thread in the Windows Updates section and get Imacri to assist you. I'm not sure I can even understand you, and I'm not sure you undersood what I said about .NET 4.x either. Maybe uninstall what you've got now and install 4.5.2 or 4.6. (There is only one program on my Vista PC that requires 4.6, otherwise the Microsoft-recommended 4.5.2 was the only 4.x version I ever needed in the last 4 years. Of course I also have .NET 3.5, which includes .NET 2, but that appears to be OT.)

Do you think it was KB982861 (IE9?) that installed KB2117917 and KB971512, i.e. are they immediately adjacent to one another in Installed Updates? A screenshot might help to clarify this question (and many others). Are you familiar with Snipping Tool?

Vista Guru
Gold Member
I had also tried to install 4.5.2 using the standalone installer. Same issue. The old driver for my graphics card is working fine and all I need but, I'm thinking of using Enable Logger to log an installation of .net framework. Too busy for that right now and the golf course is calling.

I understood what you said.

Since you're interested, here's a screenshot of all the updates-

Vista Guru
Gold Member
I hope the screen shot showed up. It was displayed in the post before I replied but I can't see it now.

Update- I can see the screen shot now. Took a couple of minutes to display.

Here's a screen shot of the update history. Interesting that some of those aren't included in the installed updates-

Thanks for the screen shots. I am concerned that you successfully installed two slightly different versions of Windows Update Agent 7.6.7600.256 on 3/20/2019. I'm away from my Vista desktop at the moment, but I'm pretty sure I only have "Agent" and not "software" (will check to confirm soon). If they cannot be found in Installed Updates, then you could only remove by reinstalling from the ISO again. I suppose that was you who installed IE8? That was unnecessary: I went directly from IE7 to IE9 when I reinstalled in 2015. KB944036 was apparently a security update for IE8; wonder why Date Installed says 7/29/2012. KB956250 was an update for .NET 3.5 SP1. Speaking of .NET, what does it look like in Programs and Features? Any 4.x at all? Does Windows Update check forever without finding anything? Why haven't you installed the world-famous "speed-up" patches? I still say you should start a thread in the Windows Updates section if you need further assistance.

Regarding my own curiosity about the IE9 standalone installer: It does appear to have installed KB971512 (the Windows Graphics, Imaging, and XPS component of Platform Update) and KB2117917 (Platform Update Supplement). It's worth noting that Platform Update had three other components (KB960362, KB971513 and KB971514) that were evidently not prerequisites of IE9 and were therefore not installed. Those updates are Recommended rather than Important, so I wouldn't worry about them at this point.

Vista Guru
Gold Member
I had installed IE 8 because I couldn't immediately find my IE 9 installer. Obviously, I found it later.

As I mentioned earlier, I have .net 3.5 SP1 and the 4.0 Client installed. What's really stupid in many different pieces of software is that they don't automatically detect things that are already installed and reinstall them. As mentioned, the 4.0 Full installer starts out by trying to install the Client which is already installed.

I didn't install the Update Agent.

I also think the Windows Defender updates were installed as a result of installing Norton Security.

The only real issue I have is installing .net 4.03.19.................... and that's if I want to update my graphics card driver. Not a necessity and I wouldn't install the latest one anyhow because NVIDIA disabled use of CUDA for hardware acceleration in cards before the 600 series.

Just as I thought, there is no Windows Update software 7.6.7600.256 on my Vista system (Agent yes, software no). If it was me, I would right-click that line item, View details, and click links in an effort to learn when it was created and what's so "Important" about it.

wither 3 said:
...Strange thing is that I have Windows Update to download/install updates automatically...
Click to expand...

I somehow overlooked that earlier. "Automatically" has been inadvisable for 3 years, oh guru. Change the setting to Never check for updates (the only recommendable setting), don't forget to click OK, then Restart. This setting will not prevent you from checking for updates whenever you want to, and there is no good reason to ever change it again.

Assuming this thread is still about Difficulty installing .net framework 4.0 full profile, try again with Windows Update not running. It might be helpful to first uninstall 4.0 Client from Programs and Features. Good luck!

Vista Guru
Gold Member
I assume the software is for the agent. Right clicking it doesn't provide any links or details. The links for the agent indicate that we have the latest version. The only reason I had Windows Update running is to make sure that there's nothing else out there.

I don't think running the .net off-line installer with the updater stopped will help. In the next couple of days, I'm going to try it with a logging program running for a little while just to see what's going on.

Vista Guru
Gold Member
Well, I tried to do a registry change to allow Windows logging but was unsuccessful. That happens when you don't know what you're doing. However, I had to run errands this afternoon and, before I left, I once again ran the .net framework 4.0 Full with Windows Updater stopped. When I got back about an hour later, it had installed. Go figure. Never had this problem before but now I was able to install a piece of 64 bit software and a slightly later NVIDIA driver without issue. Happiness abounds.

Vistaar said:
...Does Windows Update check forever without finding anything? Why haven't you installed the world-famous "speed-up" patches? I still say you should start a thread in the Windows Updates section if you need further assistance.
Click to expand...

Regarding speed-up patches: It seems rather absurd to download an April 2017 cumulative security update for IE9 when an April 2019 version should be available on Tuesday, but to each his own... 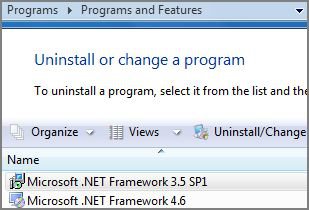 Vista Guru
Gold Member
I guess you're talking about an update for server 2008 that's applicable to Vista?

I see you have managed to install all updates except the optional ones. Do you have .NET Framework 4.5.2 now?

Vista Guru
Gold Member
It so happens that I do. I can't remember why but I think I tried it because of the problems with the others. It installed in about 5 minutes. In the other thread created by townsburg that you're posting in, I mentioned that I have installed all the updates to Vista other than the server 2008 updates.

When I think about it, I probably tried it immediately after running the 4 security updates provided by Volume Z in that other thread.