The link below from Toshiba will help show you how to create a set of recovery discs as a backup of your recovery partition in case something happens to it. It will also show you how to do restore the original factory image of Vista like it was the first day you got it.

How to use the Toshiba HDD Recovery Utility

Thank you very much.

It`s very helpful for me.

Hey man!
i had a 5th drive which is hidden now in a laptop!
i can't use the first method as it has HomePremium
and i don't find any explorer under policies
help me regain my fifth drive! 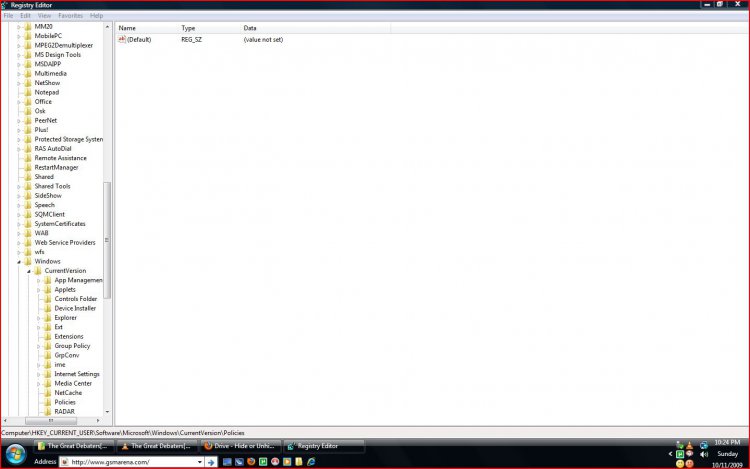 If this is an external drive, then try disconnecting it and reconnecting it, or restarting the computer to have it back again.

You could use METHOD THREE in the tutorial and type 16 for the E drive as in the yellow TIP box at step 4C.

Do you have access to C Vista drive now?

Did you also select (dot) Decimal, then entered 16 instead of just entering 16?

Member
Hi, I am having some trouble with all of this, I wonder if someone can help.

I have just installed Windows 7 onto my laptop and I have created a couple of partitions, plus a RAM drive. I also have an external hard drive plugged in, and there is an optical drive. I changed the drive letters for the RAM drive and external drive to way down the alphabet as I use a virtual drive and pen drives on a regular basis and when they take on the next available letter it can be dead annoying if i plug the ext hdd in after a pen drive and all my shortcuts are incorrect.

Here is a screengrab of what it looked like before:

I don't want the "C" drive or the "R" drive to appear in Explorer, so I tried Method Three in your tutorial. I followed every step precisely, and using the yellow tip box I worked out that C=4 and R=131072 so I tried entering 131076 (I tried it as hexadecimal and then later as decimal as I didn't quite understand that bit, both attempts gave me the same result

Here is a screengrab of what it looked like after:

Any help would be greatly appreciated, thank you
Last edited by a moderator: Apr 27, 2013

You really don't want to hide the C: drive that Windows is on. It could cause unknown issues.

Member
I thought that this was a cosmetic change only, and the drive would still be accessible, just hidden from view in explorer. If it needs to stay there then that's no big deal, but if I can hide it I would like to. Could you help explain how I hid drives "E" and "F"? I read through the comments from when you have helped other people and I saw that you recommended with an external drive to disconnect it and reconnect it, well my external drive is still visible, and I tried ejecting the DVD drive, and disabling/enabling it in device manager but it made no difference

I'm not sure why it also had E and F hidden when you only set it to hide C and R. :huh:

Only having it hide R would allow the others to still show.

You wouldn't want to hide C, since other users would need to be able to see the C drive to access their user folders and such.

Member
I'm the only user, it's just my own personal laptop. I literally only have windows and driver files on C, everything else (including the desktop) is on separate partitions/drives. I can live with C remaining, I will just hide R like you said.

Thanks for you help, and thank you for responding so quickly, this forum and sevenforums.com are really great

PS: Will post on Monday to confirm it has worked, left my laptop at work

You're welcome. I look forward to hear how it worked out for you.

Member
I had my B drive hidden using this method for a long time. I had some spyware on my system and had to run various utilities to remove it. The spyware is gone, but as part of the "fixing" process one of the utilities had to unhide a lot of files. So it appears that either that "unhiding" process or something the malware did prevented this method from working.

I have confirmed the settings are in the registry and also tried disabling/enabling via the policy snap in. The settings are there, but the drive still shows in the My Computer window. I also tried changing the B: drive to a different drive letting and using the corresponding reg setting for that and does not hide.

Any idea if there is another setting somewhere that may have been enabled that would cause windows to ignore these settings?

The A: and B: drive letter is usually used for floppy drives. You might see if changing the drive letter to something else, and hiding it may work.

If not, then if you like, you might see if removing the drive letter for the drive will allow it to be hidden afterwards.

The A: and B: drive letter is usually used for floppy drives. You might see if changing the drive letter to something else, and hiding it may work.

If not, then if you like, you might see if removing the drive letter for the drive will allow it to be hidden afterwards.

You're most welcome Chico.