[FONT=&amp]After a decade, Microsoft has finally cut off support for the Windows Vista operating system.[/FONT][FONT=&amp]Mainstream support for Windows Vista ended back in April 10, 2012. However, its extended support for the second service pack lasted for five more years.[/FONT]
[FONT=&amp]By April 11, which is today, Microsoft will no longer offer hotfixes, security patches, or any sort of update to its users around the globe. With this in consideration, anyone using Windows Vista past the support date could leave the OS vulnerable to security risks and viruses that could harm the computer. Internet Explorer 9 on Vista has also been discontinued, which could expose users to even more threats. In line with this, Microsoft will also cease providing technical support for computers running the OS.[/FONT]
Click to expand...

Member
Maybe not quite the end of the road. I couldn't quite believe it either: 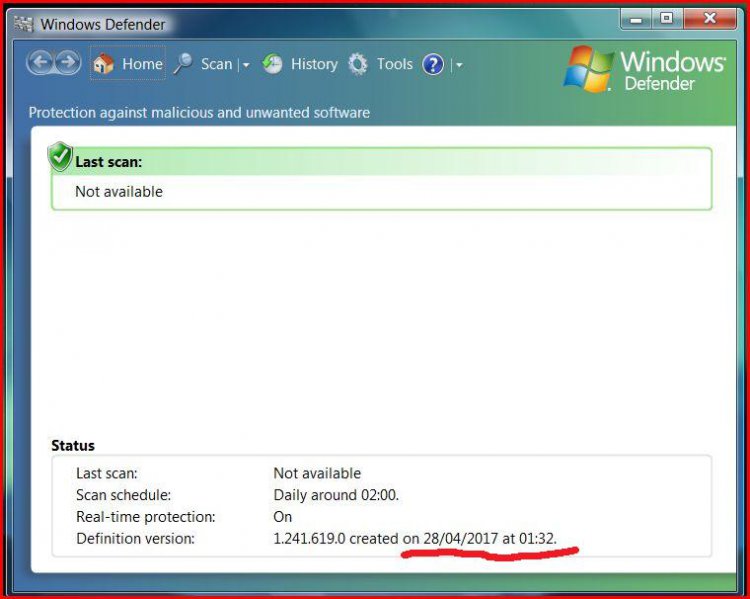 Mooly said:
Maybe not quite the end of the road. I couldn't quite believe it either:

A definition update for defender or MSE isn't quite the same thing as a new hotfix for Vista. No more patches for Vista.

Don't be one of those that simply adhere to Microsoft policy and give up. I've been doing this succesfully on Windows 8 for over a year.

Don't be one of those that simply adhere to Microsoft policy and give up. I've been doing this succesfully on Windows 8 for over a year.

M$ could always build a check into the installer.

townsbg said:
M$ could always build a check into the installer.
Click to expand...

Yes it's possible but why would they? They never did with Windows 8. Vista is SO LOW on their radar as to not matter.
Still, this is a Vista forum. It should be loaded with threads on how to CONTINUE to get the most out of Vista, including this subject. People on this forum should be looking into matter, by the oodles. There's more going on at MSFN regarding this matter and other Vista topics. Why isn't there the same interest here?

Looks like they are all .Net framework security updates that work.

Well, one week from today will reveal all.

Jody Thornton said:
Yes it's possible but why would they?
Click to expand...

If they do it will probably be to discourage users from staying on Vista with the hope that they will downgrade to 10.

We have liftoff. Server 2008 updates have been successfully installed on Vista. We'll seek out the .NET updates, but I don't anticipate any issues. So it appears we're good to go (hopefully until January 2020, but we'll take it a month at a time).

I'm hopeful that some interest will be renewed in this forum, sice this definitely extends the longevity of Vista for devoted users.

Thanks for this! I have successfully installed those same updates (the ones in the link). Good news, I can postpone that update/replace decision a little longer LOL

gonzo24 said:
Thanks for this! I have successfully installed those same updates (the ones in the link). Good news, I can postpone that update/replace decision a little longer LOL
Click to expand...

That's right. I currently run Windows 8, and I'm going to be getting a new machine to transfer my license too. Me thinks I may put Vista Ultimate back on this current PC, and run it until then

Thank you for the information!

Sigh! So sad that more people here on this forum haven't made this procedure a de facto part of running Vista. I just cannot understand the doubt that townsbg seemed to have towards this, but here we are in March 2018. I have reinstalled Vista on my old old box, and updated right up to this very month, using Vista and Server 2008 updates - SUCCESSFULLY.

I know there are people still here running Vista. On MSFN, this has been a hot topic EVERY month. Why not here though?

I'm not angry about it, but I'm just stymied by the lack of interest even by those running Vista.

Maybe it is apathy - few are aware Vista can keep going, and those who are can't be bothered to go and get the updates.

Yes I'm one who can't be bothered to update Vista. It's working fine so far

Well given that most don't seem to care much about this, I thought it be still prudent to bring to your attention:
Windows Server 2008 SP2 switched to rollup model - gHacks Tech News
(Basically Server 2008 Updates are being issued with the unified/rollup model.

So if you use these updates to patch Vista, you'll now benefit from the rollup model. Just thought you should know.