How can i get the most out of windows vista for gaming? (New Member)

Hi I've recently restored a used DELL Vostro-200 to working order and i've also installed a salvaged GPU from one of my friends and the GPU is a AMD HD5450. I've installed the latest drivers for it and i've done a Auto-Tune on it from the AMD Catalyst software and it increased some of the settings in the Over-Drive mode, which caused my PC to freak out so i lowered some of the settings till it stopped. when i finished installing the GPU i tested its performance by running the fully up to date version of Hale-Life 2, and i noticed that it was lacking in performance and was doing slightly worse than the Intel integrated graphics in the motherboard. I've followed the Vista Forums' guide to better Performance and i change some settings to where the OS runs fast, but it didn't speed up the GPU's performance. Hopefully someone here can maybe help me fix my problem since I'll be using this vista machine for a while till i get my windows 7 PC fix. Some more about my problem is that i have the game installed on a extra HDD but it loads fast but has poor performance in the simplistic spots of the game. i've done defrags on the HDD and reinstalled the game to see if it'll work after a clear of the games files. I'm gonna try the Half-Life Lost Coast Benchmark to see what the average frame rate is and if it'll run smoother when it changes the system settings after the results are viewed. Thanks to anyone that might be able to help and I'll try my best to respond if you think you might have a solution to my problem.
Last edited: Jan 3, 2018

Unfortunately newer graphics cards or current games are going to have a newer version of directx than is compatible with Vista. You will have to look for cards and games compatible with version 11. Really Windows 7 is becoming outated for gaming because the newest version is only available for Windows 10. FYI when you look for compatible cards look for DiectX 11 compatibility. It can't say 11.1, 11.2, or 12. As for Half-Live 2 your CPU doesn't meet the recommended requirements. You can look for a faster one but look for one that says lga 775 socket.
DirectX - Wikipedia
LGA 775 - Wikipedia
Dell Vostro 200 Series Specs
https://www.systemrequirementslab.com/cyri/requirements/half-life-2/10205 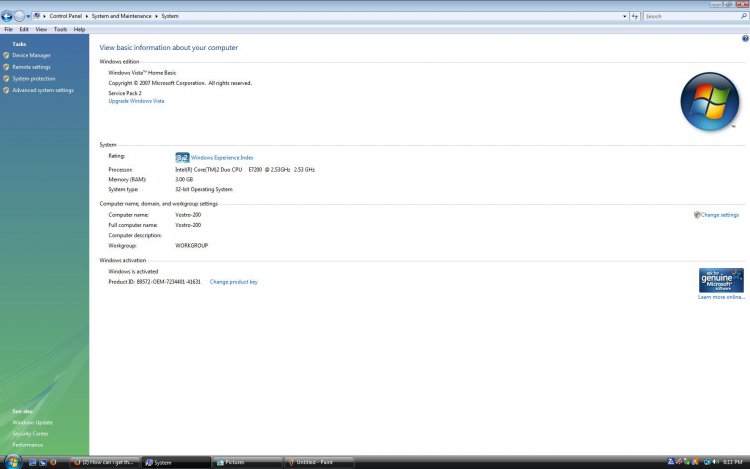 Since i didn't tell my specs, here they are. Not being mean and all but i was able to run Half-Life 2 fine on my old gaming PC that was build in late 2004, i know i need a better GPU but i don't have the case for it right now.

I was going based upon the listed specs. It looks like you have gotten an upgrade. Really the only other thing that you can do is get a better graphics card or try to overclock your current one. That is very tricky to do safely and I don't know enough about that to help you. Maybe someone else will help.
Last edited: Feb 7, 2018

I've used the AMD Over-Drive auto tune option which made my computer freak out a little. Anyways i might try and find a better GPU when i go to my local Micro-center store this Saturday with my friends. I have around $100 and a amazon $25 gift card from one of my friends. IDK if i should look there for one or on eBay? What do you people think i should look for, just remember I'm on a cheap GPU budget so a decent GPU for a decent price would be nice. Thank you. (Sorry i didn't post my specs in my original post.)

I'm not up to date on the latest graphics however I'm not so sure that you can get a better one than what you have for only $100 and I've never bought a graphics card from Amazon. You might do better to save until you can afford a more substantial one but if you do get one make sure that it says DirectX 11. Also look for 7 drivers; those should work with Vista and the card won't do you much good without them. As for ebay I don't think I would buy one from there. It could come used and busted. The same thing goes for Amazon because there are private sellers on Amazon.

If all you want to do is play HalfLife - any modern graphics card for that price will do - because they will still seriously outclass anything you have right now.

I built my rig when Vista was jsut transitioning to Windows 7, and I've stayed with it but upgraded lots of stuff piecemeal - currently I'm running an nVidia GTX 970 for graphics with an nVidia 560 Ti 448 core dedicated to PhysX.

These are all the video cards listed at price points between $50 and $100 USD. As you can see there the first one that comes up is an nVidia 1030-based card. For a comparison with your listed HD5450, see UserBenchmark: AMD Radeon HD 5450 vs Nvidia GT 1030

Obviously a heck of a lot more power, and that first card is not made for high-end gaming, but will handle Half-Life 2 relatively easily. And since you have the gift card for Amazon, I'd do some more research - the main things you're going to have to worry about are:

The biggest issue here is that Dell is notorious for using very proprietary hardware, especially motherboards, PSUs and cases. So much so that it gets to be a major PITA to try to upgrade too many components in the machine, which is exactly what Dell wants - rather than making it easily upgradeable, they want you, the end user, to get frustrated and go out and buy a new machine.

Some pics of the inside of the case would be very beneficial in terms of figuring out these things, as well as a closeup of the motherboard part number, or else you could check the machines Service tag yourself and gte an accurate parts listing (as well as manuals and other things)

This is a mini-tower so he won't have a lot of room.

And the first card in the Amazon search link is a low profile card, as are many of the others - the 1030 is a small card.

But that is also why I said that that is one thing to look at.