noman2912 said:
i have tried everything but nothing is working for me the drive icon for my d drive is a square one with red dots and i want it back to the normal one like other drives but tis not happening i tried the regedit method but no good and tried this one also and everytime i restart my pc the icon cache reappears and i cant do anything plz plz help me out i want my icon back

noman2912 said:
i have tried everything but nothing is working for me the drive icon for my d drive is a square one with red dots and i want it back to the normal one like other drives but tis not happening i tried the regedit method but no good and tried this one also and everytime i restart my pc the icon cache reappears and i cant do anything plz plz help me out i want my icon back

Use the TIP box at the top in the tutorial below to see if you may have a autorun.inf file as described there. If so, delete it.

If not, then try using METHOD ONE or TWO in the same tutorial above using the path C:\Windows\System32\imageres.dll,30 for the default C: drive icon.

Member
Hi
Does Method 1 or 2 apply to AllPrograms Icons... and saved Downloads and Documents etc. I have an extHD with app start from All Programs. Upon initial install the ext Drive Software the three options from All Programs had an Icon for each now one has the rectangle box. I imagine they are startup shortcuts to xxx.exe
So, long post - short ...Does 1 or 2 apply to All Programs Icons (thumbnails) and to My Docs - My Downloads etc.

It's for all icons.

well that helped me to get the icon back by deleting the autorun file hidden but now there is some other problem that is the drive which had that problem was D drive and my window is in C drive and as u know the drive in which os is installed is with the window sign above it and others are normal drives icon but now after deleting the autorun.inf file and the icon cache file and after restarting the computer i got the drive icon for my D drive also as the C drive one i mean the os sign on the drive icon dont know why
as a result i got 2 drive icon with os sign above them(C & D) and two with out them(E & F)plz tell what to do
and i want only my C drive to have the os sign above it which actually i have but not on the D drive and want other drives to have normal sign

You can use METHOD TWO in the tutorial below using this path to change the C: drive icon back to the default one with the Windows flag on it.

awesome !! it worked like a charm. I almost freaked out when I saw my office files icons changed to some random icons. tried your second fix first and did the trick instantly. thanks a lot

You're most welcome Lddgnz, and welcome to Vista Forums.

thanks Brink ..... glad to be here !! and btw it's Lddgnz and not Iddgnz.....don't bother to ask the sense of it ..... just set it up once on some website while creating a username as it was not allowing any other combination and since then I am using it for almost for any account I create on evry othr website

somehow it wouldn't let me post :P but now i hope it does.

hello there, i realize the last post was at 2009, but i hope you guys are still monitoring it.

1: cmd won't let me enter the first command in Method2.


2: i was directed here in my quest to reset my dvd/cd drive icons, since windows isn't doing it at the moment.

i would like you to give me a detailed walkthrough of what to type in cmd and how it should look. dos in windows 3.11 has been ages ago for me :P

for example, when i open cmd, the first line is :
C:\Users\Jop>

I hope i gave you enough info.

You may have copied the bullet that was in front of the command as well. I removed the bullets, so please try again exactly as it is in the tutorial. You could also do OPTION ONE to run the BAT file that will do it automatically for you instead.

Thnx for the reply.
I couldn't copy/paste into dos, but i typed it (using 2 screens is helping alot there :P )
I tried something else and noticed that i left out a space somewhere :P
Did it, and it went perfectly. Thanx.

That's great news. I'm happy to hear that you got it sorted.

Member
This is an old thread but I'd like to ask a question related to it and hopefully get some help. I'm using Vista Home Basic, SP2, 32bit.

More often than not, when I delete a file, the file's icon goes away but a "ghost icon" remains behind. Say for example I have a file named 003.wmv in a folder and delete it. Then I move a file named movie_1.wmv into that same folder and try to rename it 003.wmv, I get an error saying "003.wmv already exists" and it won't let me rename it. It doesn't give me an option ot "Replace" or anything, it just says it can't be renamed.

If I rebuild the icon cache with the .bat I downloaded from this tutorial it's all good again, but is there a way to make these "ghost icons" quit happening in the first place. Is this normal for Vista or does it sound like something's wrong with my system?

This may be only helping from the computer being restarted. It sounds like it may be a refresh issue. If you refresh (F5) the desktop, does it also get rid of the ghost icon?

You might see if running a sfc /scannow command may help.

Member
Well, wouldn't ya know it, now it's not doing it, I can't reproduce it at any rate.

I didn't think about F5 but that sounds like a good idea to try if and when it does it again. Thanks a lot Brink. I'll report back when I know something one way or another.

Hi, Brink,
The solution worked great. the manual command prompt. But I would like to know, how this problem come in to being. Is it because of virus or some other thing. Really Help ful article. The link would work, but shown as a generic link, this is the best solution. Thank you

It's caused by the icon cache getting corrupted. The problem is that anything could corrupt the cache, so it's nothing to worry about unless it keeps happening. If so, then it'll be a matter of trying to figure out (narrowing down) what may be corrupting it. Usually, it would be from something that you just recently changed or installed.

Hi Brink
Thank you. I am also seeing your tips and procedures on Windows 7. Excellent piece of advice for newbies to quick soltuions.
The icon cache restored correctly. But what about if one gets a drop menu, while moving cursor in Mozilla firefox startup, and see the Frequent..., the recently visited pages show as generic files and not as program or sites icon. If suppose, i visit the windows sevenforum, normally in the history tab, it shows the sevenforum icon besides the topic i visited. But in the startup menu, in the firefox Frequent..., i get generic icons with the description of the pages visited. Iam having win7, but i think that it will work there also.

Where could i see that the attachment is included in my post? pl 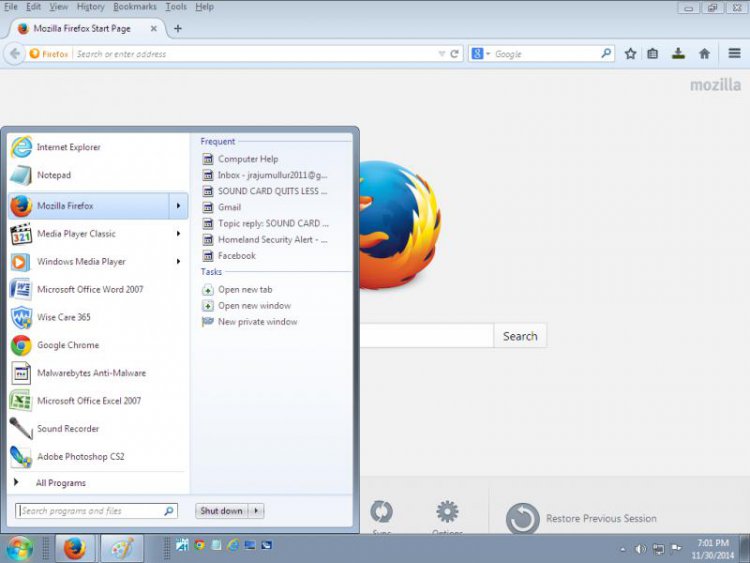