Thanks Shawn,
This site supports resume,Thanks a lot man.

Thank you for the feedback on resume.

We have had to remove the direct installer downloads due to copywrite issues.

I had only downloaded the photo gallery and wanted to download the Live Messenger,guess I have to do it some other way.
Anyway whatz with the whole copywrite issues?
Cheers

Trust me, redistributing Microsoft code is a legal minefield, we decided to remove them rather than face the wrath of M$.

Thanks z3r010,
I know this is not the right thread to post this but I was wondering if you could tell, to which folder is Windows Live OneCare downloaded and what type of installer files .exe or .msi are they, so that one might keep them for future.
Cheers

I have not used Windows Live OneCare, so I do not know if it installs a MSI installer like the other Windows Live programs or not. You can do a thorough search using *.msi in the search box to find the location if one was installed though. Be sure to include System directories and compressed files in the search options.

I have installed the Windows Live suite. Do I need to install WLInstaller? Tried to do it and it claims that I have NOT installed Window Live Suite yet. What's the cause, anyone? Or Do I really need to install it at all?
Thanks everyone.

The WLInstaller is just ran to install the selected WL programs from within it. That's all. You can either save the WLInstaller and run it from the deskop, or just click on Run when downloading instead.

Usually there is a shortcut of the installer place on the desktop or Start Menu to use to install any additions WL programs though.

The Windows Live Beta programs have been updated to the 14.0.8050.1202 version. See the first post for more details.

Hi everyone,
I am new in this forum.... Does anyone can tell me :
1) if the window live suite is a free download?
2) I tried to use window messenger but everytime I wanted to go further it always told me that I needed to install the window live suite, then gave me a code: mentioning"catastrophique failure.....

Now, i am desperate and really need your help. Thanks a lot.
Laurencer.

Yes, all of the Windows Live programs are free from Microsoft. You might try the latest beta version of Windows Live Messenger to see if it works better for you.

Hope this helps for now,
Shawn

Hi,
Thanks for the reply. Actually my biggest problem is: It seemed that the window live messenger was not fully installed which means: I kept receivng the code: 0x8000fff, I tried to figure it out then it told me to download Regcure to get rid of it.. I bought a new webcam which I really wish I will be able to use tomorrow but it didn't work the way I wanted...please help. Thanks a lot.
Laurencer.

If you haven't already tried, you might see if reinstalling Messenger may help any. I used the beta version, and it works fine for me. Maybe you will have better luck with it.

I think that you'll now find that with effect from Thurs 8 January 2009, with the exception of Windows Live Movie Maker which remains in beta, that the rest of the Suite of Windows Live Programs were released as Version 2009. It appears as though most have the Build Tag of 14.0.8064.206, although I haven't been able to confirm that it holds true for all of them.

hey brink i have a problem it wont let me install windows live as it says i already have them, i dont, i deleted all my accounts and started new ones but everytime i tryed to open it it says that its just a shortcut -delete? and if you try installing it againit says i have it its not in programs but i still cant install it i tryed an app called ZapMessenger but it keeps going on i have vista home preimieum? any help?


Rodredrum said:
hey brink i have a problem it wont let me install windows live as it says i already have them, i dont, i deleted all my accounts and started new ones but everytime i tryed to open it it says that its just a shortcut -delete? and if you try installing it againit says i have it its not in programs but i still cant install it i tryed an app called ZapMessenger but it keeps going on i have vista home preimieum? any help?

Try this and see how you get on; 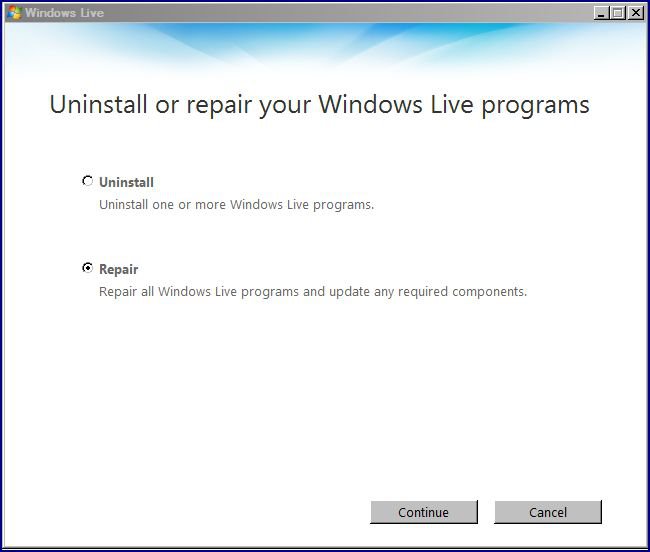 Today we released an optional update for Wave 3 of the Windows Live Essentials suite in all 48 languages. This is a minor release that updates Windows Live Messenger, Mail, Family Safety, and Sync. You can install it from http://download.live.com, or through Microsoft Update as an optional update. While this is our last planned update for Wave 3, we will continue to support this release for the foreseeable future as it will be the last version that supports Windows XP.

This is a minor release with a small set of targeted bug fixes and minor changes. Even though most users will not run into the issues we addressed, we felt they were important to fix. This update also contains a small set of changes to ensure that Essentials supports new advances coming in Wave 4.

Rest assured, we’re continuing to work hard on Wave 4 and are in the final stretches. This update is a first and important step in that direction.