How to Change Size of Icons in Quick Launch in Vista​

Information
This will help you have the icons display the way you want in Quick Launch by showing you how to change the size of the Quick Launch area, and shortcut icons to be either Large or Small icons.
EXAMPLE: Before (Small Icons), After (Large Icons), and After (Double Height) 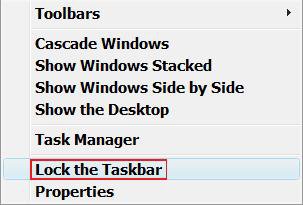 ​
​
3. To Resize the Quick Launch Icons ​
A) Right click on a empty area of the Quick Launch area between the dotted bars and the icons. (See screenshot below)​
​
B) Click on View and click on either Small Icons or Large Icons to check the icon size you want.​
​
​ 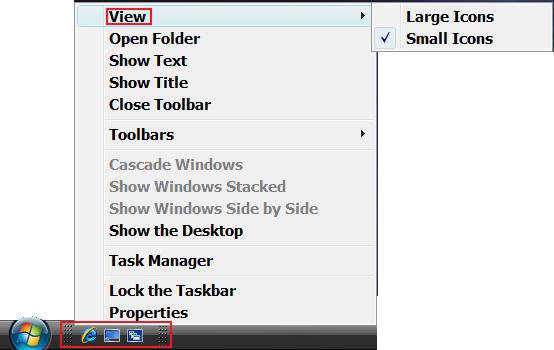 4. To Resize the Taskbar and Quick Launch Area ​
NOTE: To be able to see all of your icons.​
A) Move the pointer over the lines until they turn into a double arrow, then left click and hold and drag it to the size you want it. (See screenshots below)​
​
​

5. Click Lock the Taskbar to check it back. (See screenshot below step 2)​
​
That's it,
Shawn

I can resize the icons to large, but when I reboot windows they always reset as small. I'd like to have large icons by default. Is there a setting that resets icon size on reboot?

I'd just like to say that it'd be nice if when using the large quick launch icons you could have two (2) rows of taskbar buttons for open windows. It's pitiful that Windows Vista does not function in this way. Instead, we get large quick launch icons, a fully exposed Start button, and even two rows of tray icons, the clock having the day of the week underneath the time. Yet we still don't get two rows of taskbar buttons! They are top-left-aligned. It would be nice if they were at least vertically centered, if not bigger (taller). One thing that bugs me is not being able to minimize/restore a window by moving my cursor all the way to the bottom of the screen, and then left/right depending on where I think the cursor wound up. When I see the blue glow/hover effect, I know I am hovering over that taskbar button. That's just the way I do things. I think it would be best if Vista took that into account, as I'm sure other power-users are like me.

@konimotsinui: U can have 2 rows. Just make sure taskbar is unlocked, then place mouse pointer over taskbars top edge til it makes a dbl arrow, then drag taskbar a little higher. Once u've opened enough apps to fill the horizntl space of taskbar w buttons, they start a new row. U can make the taskbar really high and have multipe horizontal rows, if u keen 2!

The problem with the 2 row deal is that when you have those you loose space on your screen but if you go into the taskbar properties you can have both rows hidden with a simple change done through taskbar properties.