Menu
Log in
Register
You are using an out of date browser. It may not display this or other websites correctly.
You should upgrade or use an alternative browser.

In my Ult. Vistax64, Windows update hangs. I tried numerous fixes from Microsoft (MrFixIt) and others. nothing seems to fix it, including a full system image restore from a month ago.

And I have noticed that after booting up, and perhaps at other times, my CPU usage goes to 100%. Both the Windows update service is running (wuauserv) - see pic - and when I stop it, CPU usage gets better. 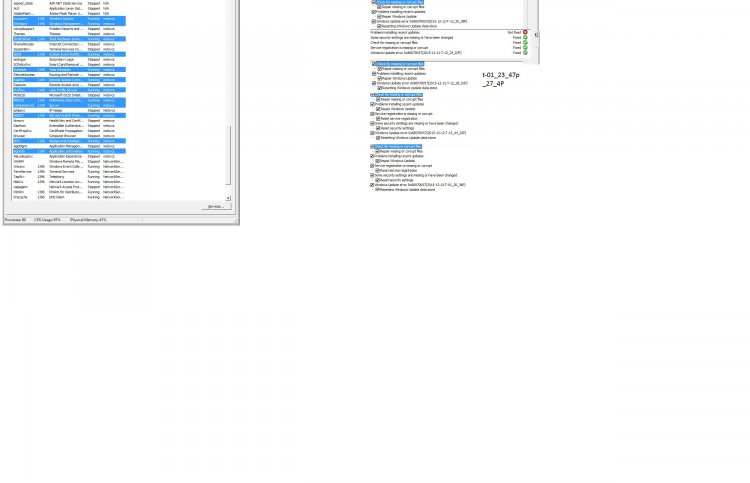 what is a bit concerning is that my McAfee virus is also taking up CPU usage as if transfer activity over the internet is heavy. No viruses are found, either via real-time scanning or if I run a manual scan on the hard drives.

I have also run an sfc /scannow , there are a lot of PendingRenames, which seem to be from the sfc command fixing errors, as well as a lot of "duplicate ownership...", which is sort of scary to see when I have a problem with my computer.

Besides the failure of the windows Update, the SFC /scannow keeps finding corrupt files and repairing them, and it does not seem just limited to a few that "are erroneously marked as corrupt" and not a problem, according to research into these problems.


The computer seems to be working fine, but not being able to install updates is a problem, and the high CPU usage is suspicious. Any help would be appreciated.

I attached my CBS logs but don't see them. try again...

Welcome to Vista Forums MILESCFA. Windows Update has been performing dreadfully for virtually all of us since August (see http://www.vistax64.com/windows-updates/303992-windows-update-just-seems-hang-while-checking.html), so don't jump to the conclusion that there is something wrong with your system. Running sfc /scannow on my Vista PC finds no integrity violations, and yet I have come to dread monthly Windows updates. Try installing only half of this month's updates at a time (i.e. deselect half of them). I'm not an expert at interpreting CBS logs, but yours seems to indicate at the bottom that repairs were successful. What happens if you run sfc again?

[Edit] If Windows Update is set to install important updates automatically, you would have to change the setting in order to deselect half of them as I suggested.
Last edited: Dec 13, 2015
M

Given my additional problems - recurring corruption finds and the disappearing restore points - I think my thread should remain separate, but as mentioned above, you may want to check out the link below.

fyi: I'm not even reaching the updates found but when I did, I tried selecting just one and nothing seemed to be occurring. If I can reach the screen again (ie, finds updates), I will select just one small one and let it run for a longtime...

Excellent point I did not think about. Thank you. I hated Mcafee years ago - too much interference with software. ATT Universe gives it free so I decided to give it another try last year after major virus problems that got past AVG(?). Mcafee seems OK other than when I forget to disable it on installs, and I really like having website warnings (have WOT too). I have to have some anti-V, so what would you suggest?

Avast or Avira Anti-Vir both are free only pick one.
Also free Malwarebytes and when installing on the last box before launching un-check the option to try the pro version or you will get nag messages after the trial period hes expired

I use Microsoft Security Essentials.

+1 for Microsoft Security Essentials. Its reputation for ineffectiveness was always exaggerated and is now outdated: Microsoft Aces Antivirus Test | PCMag.com. My biggest complaint with it currently is that definition updates are incredibly slooow, like everything else that must be downloaded from Microsoft.

Avira does not support Vista, which narrows ilikefree's recommendations down to Avast. I would infer that Brink thinks Avast is very good, since he maintains a sticky thread here that announces each new version. I might be willing to try it sometime, but haven't so far. AVG and Panda both gave me more trouble than they were worth. MSE is like a much-needed vacation from AV support forums. However I suspect that Windows Update will continue to frustrate no matter what AV you are using. Almost makes end of support sound like something to look forward to.

I wonder what all the Mac or 'Anti-MSE' fanboys are saying when someone using MSE says about them topping the AV tests recently.
I'm just hoping they haven't turned MSE into a Windows Update-like (slow and non-optimised for Vista).