I am unsuccessful in getting the association of .doc and .docx files with Word 2007.

I have tried two methods:
One using:
Settings > Control Panel > Default programs
Associate a file type or protocol with a program > Select .doc > Change Program
Select Microsoft Office Word > Click OK
The "Always use the selected program to open this kind of file" is grayed out.

Two using:
RT Click on a .doc or .docx file
Open with > Chose default program from context menu > select Microsoft Office Word
Check "Always use the selected program to open this kind of file". It is NOT grayed out
Click OK 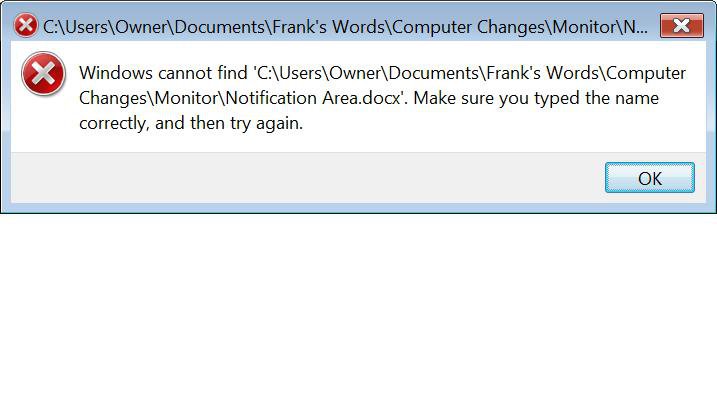 This is similar to the solved problem that I posted on Jan. 27 in the software forum "Excel file won't open"
It was solved by Barman58!
Thanks
Frank C

Not sure from your post if you have followed the exact procedure, in your first method, that worked with the XLS files? - rather than select the Microsoft Word option from the available programs list, browse to the winword.exe file which should be in the same area as the excel.exe file from previous.

If this does not help there is another method, in the control panel - uninstall programs - you should be able to right click on the Microsoft Office entry and select Change, then repair, which should fix this and any other issues

another option would be to select change, and without actually changing anything proceed through the procedure, (basically this would re-install office over the top of itself.


Sorry if these instructions are a little vague, I do not have access to a copy of either Vista or Office 2007 at the moment

I tried going to :
C:\Program Files (x86)\Microsoft Office\Office12\WINWORD.EXE
It did not put Microsoft office word in the list. I expect because it was already there.

This is a bit different from the Excel problem where I did not have the correct path.
I think I may have a registry problem.

I may try this although it is a bit complicated:
When you run an .exe file on a Windows XP, Windows Vista or Windows 7-based computer, the file may start a different program
Scroll down to "let me fix it myself"
Frank 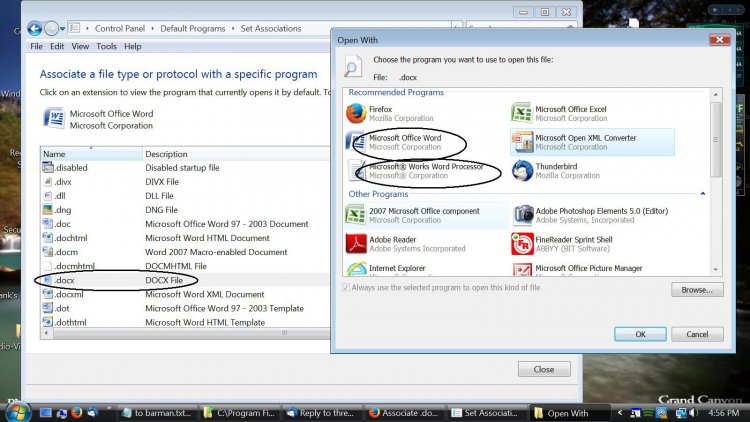 You could try the change -àdd or remove options - but without actually changing anything, you may need to uncheck and then recheck a minor option to trigger it, but the important thing is that the the change process should reset all links in the registry back in to the correct ones
Last edited: Jan 31, 2014

Thanks Barman58,
I tried your suggestion. The results were the same. Word still fails to use Microsoft office word. Excel is still OK.
Procedure:
Start > Settings > Control Panel > Programs and Features > Microsoft office home and student > Uninstall or change a program > change with no changes checked.
Process completed successfully but the results on default access to .doc and .docx were the same.
What did you mean by "uncheck and recheck a minor option. Did this mean run the process twice? Once to effect a minor change and then to undo it?
Frank

The reason I suggested the Check/Uncheck Trick is that some installers will check and see that no changes to the original are selected and not actually perform the install,

the re-install should be performed twice, so that the installer goes through the uninstall and then the install procedure, (an alternative is to add a minor option that is currently unchecked which would mean that you only need run once)

It does seem that you have a Registry issue I'll see if I can find a step by step procedure for you to perform the repair. but of course I have to advise you to back up all your data before delving into the registry

there is the following detail Here ...

Of course in your case you should find the setting to be 1 and it would need to be changed to 0, if the key is there and set to 0 or if the key is not there then this is not the issue and we need to look elsewhere

Thanks Barman58
I followed the steps to change the registry to add NoReReg - it was not already there.
I rebooted. I tried to set Word as the default for .doc using both avenues - the control panel default programs and the context option on a .doc file to choose default program.
Was the value 1 to be hex or dec ? I left it as hex. (screen shot)
The change did not produce the desired results.
Must I back this change out?
Frank 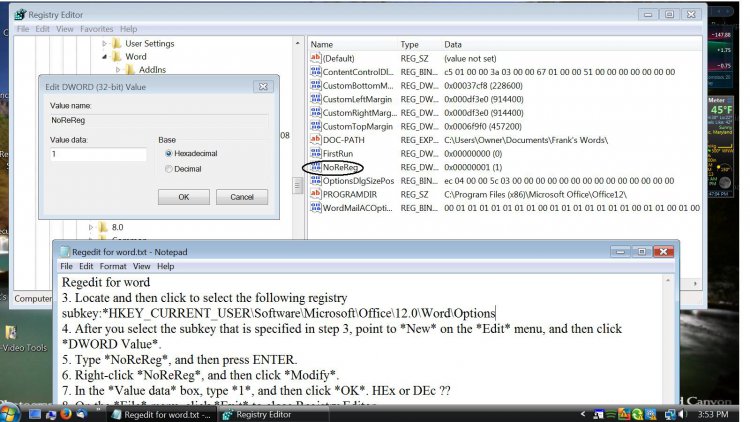 A little more information:
I discovered that even though I get the error on the file I that am attempting to open, it is put in the recent documents list of word and it does open from there.
(screen shot)
Frank 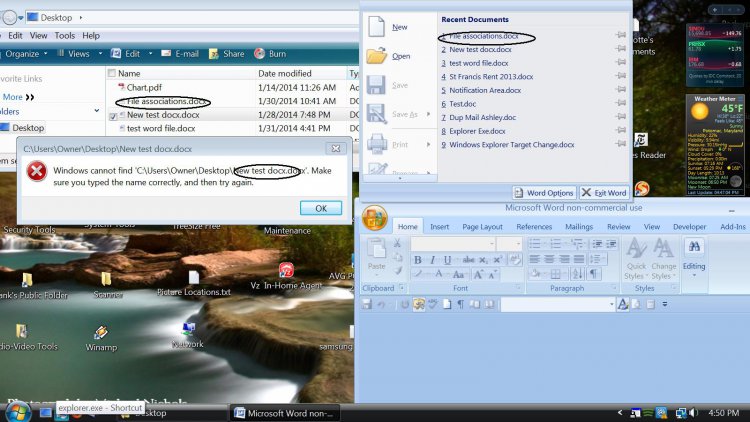 I also tried the Program Change avenue for Microsoft Office Home and Student .
I chose the Quick formatting files install on first use for word.
This ran successfully but did not change the outcome.
Frank

Hi Frank, The NoReReg" Key when set to 1 will prevent the defaults being changed, which is the behaviour you are seeing, It needs to be set to 0 to return the "normal" behaviour.

Just FYI, the key is designed to prevent an issue when running more than one version of word on the same system. Eg. Word 2007 & Word 2010. The problem is that every time you run word the system resets all the association to that version, which can take a few minutes on some systems. This can be a PITA for the users so the NoReReg. key was added so that setting the 1 value prevents word associations being reset. This can sometimes be set by other software, I like to think purely by accident

which gives the behaviour you see

Unfortunately, there are other registry keys relating to both the system and word that set the actual association of Doc, DOCx and other word compatible formats which may be corrupted and will of course overwrite the NoReReg key
There is a list somewhere in Microsoft that gives these keys and there default settings and I will try to find it and post a link later

Thanks Barman58,
I set the value to 0 (screen shot) I used the control panel default programs to assign word to .doc and .docx. and rebooted . The test of word failed as before. I tried to access a word file from my administrator id and got the same error. I wonder if there is a needed registry change higher in the registry hierarchy than current user?

I tried this process and it did not fix my problem:
When you run an .exe file on a Windows XP, Windows Vista or Windows 7-based computer, the file may start a different program
As a check I compared the registry entries changed on my desktop running vista ultimate with the same registry entries on a laptop running vista premium. They were the same.
Could I reinstall Office home and Student 2007? I have the original install disks.

Ok looks like it's time to edit the registry entries directly

this must be done from an ADMIN account or as least running as administrator form a normal user account.

Also i't a good idea to export the key information prior to any edits, just in case - right click on a key and select EXPORT, choose a name and save -this produces a .REG file that can be r-imported into the registry as a reset 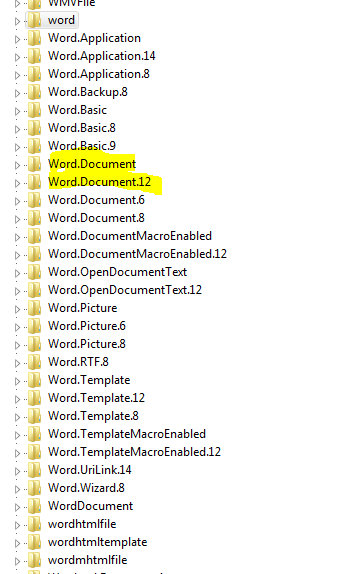 What you need to do is find the subkey for OPEN and edit this so that this contains the full path to your winword.exe file

Eg on my system the open command is at HKEY_CLASSES_ROOT\Word.Document.12\shell\Open\command

and is "C:\Program Files (x86)\Microsoft Office\Office14\WINWORD.EXE" /n "%1" you need to edit just the part I've highlighted red as the other info is essential to operation

It may be a worthwhile exercise to check that all the other "Shell" commands point to the correct winword.exe file

As for re-installing - this would be a good idea, and probably take less effort than the registry edit, I would personally uninstall first, re-boot, possibly set the associations to other MS software such as works, wordpad, reboot, and then re-install

If you decide to go this route the following Microsoft knowledgebase article may be of help ...

Thanks Barman58,
I appreciate your persistence in searching for a solution to my problem. It is amazing to see via Google searches , that many others have had similar problems.

In HKEY_Classes_Root, the key in Word.OpenDocumentText.12 looks OK it has the path:

Here are two screen shots from the registry.

It is not in Word.OpenDocumentText.12, but it is in Word.document.12

There is a computer hope forum post:
Open all extensions of type .x with a particular account
It says the wierd key is "ignore the command key- it's unused.
Additionally, that "weird" value is inserted by several cracks/pirate copies of 2007."

My Office 2007 Home and Student was purchased on 9/16/2008 from Best Buy.
It doesn't mean that I was not hacked sometime in the past. I get no errors reported by scans from AVG, Spybot or MalwareBytes.

I think that weird key may be the problem.

I would suggest that the strange key content may be a red herring - it's present on my system, and I've also not installed any cracks, my system is also working perfectly, all be it with Office 2010 , also my system is a new recent install from a week ago so contains little leftover detritus that normally builds up over time.

I think it may be time to seriously consider a re-install of Office as mentioned a few posts ago.

Vista Guru
Gold Member
I have Word 2007 in Vista Home Premium and everything looks the same in the registry as shown in your screenshots.

However, you mentioned that the path to the .exe was not in word.opendocumentText.12. It is in my registry.

Wither3,
Can you please post a screen shot of that registry entry for me to compare to mine?
Thanks
Frank

Vista Guru
Gold Member
For some reason, every time I try to make an attachment, the screen gets glossed over and IE has to restart. Hopefully you can see the attachment (I can't) even though it shows as attached in preview.