Warning
EXAMPLE: Before and After Preview Picture Change 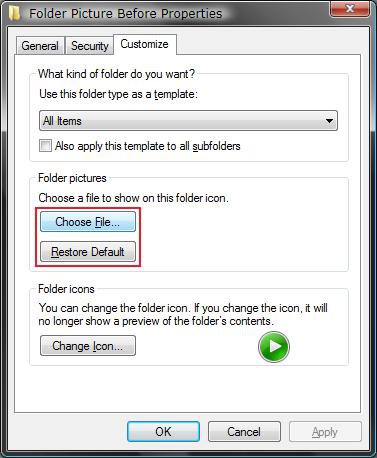 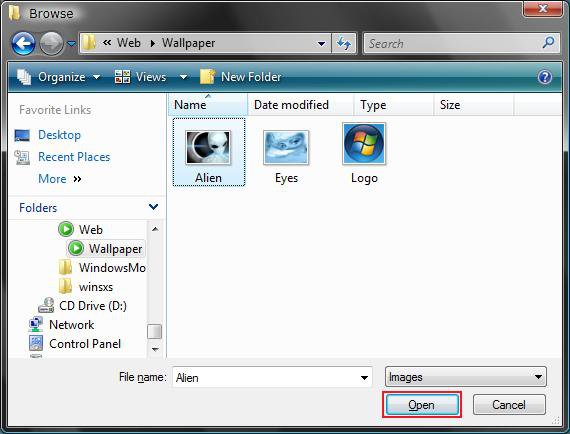 ​
​
7. Click on OK to apply. (See screenshot below step 4)​
NOTE: You may need to press F5 to refresh the window to see the new preview picture you selected.​
​
8. If for some reason the selected preview picture will not show on the folder, then try this:​
A) Do step 2 and 3 in this link: How to Hide or Show Hidden Files and Folders in Vista​
​
B) Open the folder you want to change the preview picture for.​
​
C) Right click on the faded (means it is a hidden file) Desktop.ini file (if you have one) and click on Delete.​
NOTE: The Desktop.ini file will be automatically be regenerated the next time you make a change to the folder.​
​
D) Clear the thumbnail cache.​
​
E) Rebuild the icon cache.​
​
F) Now try the above steps again.​
​
That's it,
Shawn

Do you have folder.jpg files (usually hidden) in those folders (on the external hard drive that is)?
Sometimes enabling views of hidden files and Operating system files, then deleting the desktop.ini and thumbs.db along with the other jpg files, and then reinserting the folder.jpg (and albumArtXXXXX_large/small.jpg if exist) does the trick. It takes a 1-2 refresh before it actually appears in the explorer preview.
Hope it helps

This would be normal for any external device. External devices do not retain their Windows Explorer folder view settings in Vista. If it did, it would cause problems if computer A changed something that computer B thought was still there when trying to open it.

The only way around it is to put them on a internal drive. You should be able to change them then.

Ah man thats what I feared, oh well I guess I'll just copy the files to the internal but keep the ones on the external for backup.

The file preview thing is not a biggie but I'm picky when it comes to those sorta things I like organisation. Oh well.

Thanks for your time and helps anyway guys.

Hi, this is the 1st time I have used a forum, so hope I following the correct code of practice.
I have a problem with a few music folders that display 2 preview pictures when all the mp3 files inside the folder are the same. The majority of my music folders have just a single preview picture, as expected.
Anyone have an idea?
I have tried 'properties/customize/restore default' but that doesn't help.

Did you try to customize (step 3) the ones that have 2 preview pictures to only display the selected image you chose instead?

Thank you. No I didn't try step 3 because there is only 1 picture in the folder which is attached to the mp3 files, however the same picture is displayed twice as a preview picture.

When I have had 2 preview pictures displayed in the past, they have been different pictures, similar to your example, and I have been able to change these easily by 'properties/customize/restore default'. However, with the folders that display the same picture twice, this method does not work......... or so I that. When I logged on this morning all the music folders that had duplicated preview pictures now had just a single picture

very strange, not sure how that happened, but it may have something to do with the fact that these pictures were 'assigned' the the mp3 files via iTunes, in other words, when I imported the album into iTunes it had no 'cover art', nor did the native mp3 files, therefore I pasted the album cover within iTunes, then whilst browsing my music folder noticed that these albums all had duplicated preview pictures as described above.... sorry beginning to ramble now, but this may help others with a similar problem.

I think the outcome is to be patient and check the folders again after the PC has been rebooted.

I'm happy to hear that your problem has sorted itself out now. Thank you for posting back with your results to help others.

Hi, this is my first post on this forum. I beg for help about those damn folder preview pictures. The folder preview on my Vista is just absolutely random. When I want to customize the preview picture and chose a new picture (which I do exactly like in the tutorial), it is just as if I had done nothing at all. The worse is that random preview pictures from everywhere on my computer appear on my folders and I can't remove them. I've tried to clear the thumbnail cache but it doesn't change much. Do you have any idea about what I could do ? Thank you

Have you already tried everything in step 8 to see if that helps any?

If you have, then you can use step 4 to restore the default preview image.

Thanks for replying so fast, I have tried indeed everything in step 8, and done step 4 with no results. About step 8 though, and the A/B/C steps (about hidden files) I'm not too sure because when I choose to display hidden files I see then no "desktop.ini" to delete while changing my folder preview picture.
Other than that, I rebuilt the Icon cache but it didn't change anything, my folder preview pictures are still totally random and I can't change them nor restore the default preview image. I have to say that I have my computer for 3 months and ever since the first day it has been like this.

Strange. I have notice that if you did this to a new folder with the folder still named New Folder, that it will sometimes reproduce the preview picture in other location when you create a new folder there to.

I'm not sure why it is doing this for you. I did a test by creating a new folder and naming it test, then changed the folder preview picture to a random JPG file. It displayed only that image and was not reproduced anywhere else.

The only thing I can suggest for you to try is a Repair (upgrade) install to see if it can repair this issue for you.

I came across your thread when trying to Google an answer to a similar problem. Do you know how I can change how Vista selects what two thumbnails to display for a folder? You know how Windows normally shows the folder like this picture of yours:

Anyway, I'll keep dragging in more files into that new folder, and the two thumbnails from the first two files I dragged in stay put. I'm happy at this point, so I proceed to drag in more and more files, until I drag in the 51st and 52nd file that I mentioned above. Then all of a sudden, no matter how many more pictures I add, the two thumbnails for the folder will magically revert to the 51st and 52nd file, and there is no way to change it. This really pisses me off, and I don't know why Vista would just arbitrarily pick two random pictures to set as the folder thumbnail.

I have been able to change the folder thumbnail by using a custom picture like you show in the tutorial, but that only shows one picture thumbnail, and I like Vista's new preview that shows two thumbnails in the folder. So I've been trying to figure out a way to be able to select which two thumbnails Vista displays, but to no avail. You can't select more than one picture when you use a custom thumbnail, and the desktop.ini file offers no clues or anything to try to select what pictures I want for the two thumbnails. Clearing the thumbnail cache and resetting defaults doesn't do anything either, and the problem just reoccurs.

This may be really confusing, but I'm going to tinker around with this some more. And then if possible, I will take some screenshots or try to record my display while I am doing what I am talking about above to show you what I mean. I just got this laptop on Black Friday, and this is the first time I've played around with Vista, so I don't know much about it or how to customize it to my tastes. Hopefully an easy solution is out there, and I just haven't located it yet. If anyone else knows how to do this, please let me know. Thanks.

This feature of Vista has always been, well let's just say a bit buggy.

A workaround that seems to have worked the best is to have the main folder with only one image in it, that you want to display on th folder, then create a subfolder in that folder for all of your other images.

Well, i don't know if some one already post this, but ill share it anyway.
So my problem was that i couldn't put a picture as a folder's thumbnail without deleting the "thumbnails" in the Cleaning Disk Tool after or before selecting the image i wanted for the folder. This was very anoying, i mean having to do this every time i wanted to change a thumbnail or asing one.

So here is what i found so far: folders that were created in a Windows XP cause some kind of problem when u want to change its thumbnail in Vista x64. I found this cuz the folders i couldn't personalize with the image that i wanted were backup files from my old computer.

Solution? well, now im just creating a new folder in Vista for every old folder, and erasing the old ones and it worked. No more opening the Cleaning Disk Tool every time i want to change its thumbnail.

Well, i hope this helps anyone out there who has the same problem as i did.

Thank you for sharing your results Srbrits, and welcome to Vista Forums.