Synopsis
This will show you how to change how long Vista will wait to go back to sleep mode automatically after waking up unattended and idle.

Information
This will show you how to change how long Vista will wait to go back to sleep mode automatically after waking up unattended and idle. The default time is 120 seconds (2 minutes).

​
​
5. In the left pane, click on the triangle to expand DefaultPowerSchemeValues. (See screenshot above)​
​
6. Click on the key (see table tip below) that is for the Power Plan that you want to change the wait time for. (See screenshot above)​
NOTE: Normally, you would just do this for the Power Plan that you have selected (see tip below). If you have more than one user, then you may also want to include their Power Plan, or all of them.​
​

Tip
​
NOTE: For more about how to see and change a Power Plan, see STEP TWO here: How to Troubleshoot a Vista Sleep Mode Problem and Find a Solution​
​ 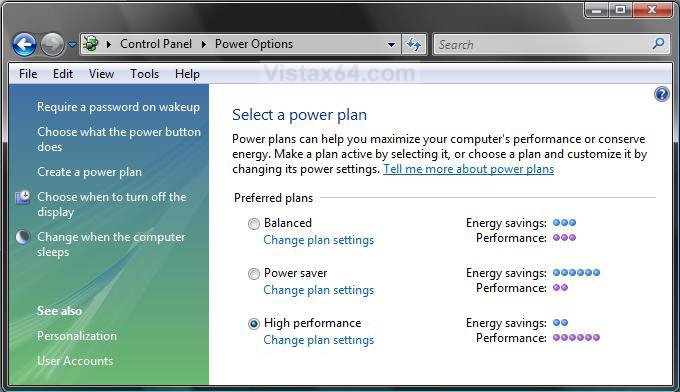 ​
​
8. Dot Decimal, and type in how many seconds you want Vista to wait to go back to sleep automatically after an unattended wakeup. (See screenshot below step 9)​
NOTE: The default time is 120 seconds.​
​
9. Click OK or press Enter.​ 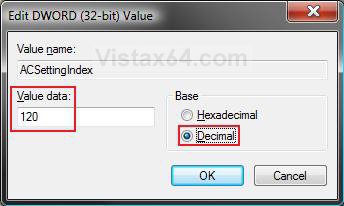 Nice to see such a time switch exists. I shut the lid on my laptop, it wakes up and new shuts down again. Or is this when you have set it to sleep after a certain idle time and that sleep is different. I have done all suggested in your excellent tutorials and still it wakes up. Microsoft help said he couldn't help me any more, except to refer me higher which would cost me money. http://www.vistax64.com/vista-perfo...k-adapter-waking-laptop-sleep.html#post856350

The Optomize__Power document from Microsoft I found, he said only referred to sleep after idle, not when I shut the lid, which sounds silly to me. It says,

Windows Vista systems are capable of waking from Sleep due to a timer event, such as a scheduled task or Windows Media Center television recording. The wake on timer feature enables the power manager to program the platform timer alarm to wake the system at a predetermined future time, based on requests from applications and services.
The global ability for the system to wake from timer is controlled in Windows Vista power policy. By default, the ability to wake from Sleep on timer is enabled for all power plans and both AC and DC power states.
Friendly name
Allow wake on timer
Description
Allow Windows to automatically wake your computer from sleep on a timer for scheduled tasks and other programs.
GUID
bd3b718a-0680-4d9d-8ab2-e1d2b4ac806d
Symbol
GUID_WAKE_ON_TIMER
Defined in
Ntpoapi.h
Balanced defaults
Enabled (AC)
Enabled (DC)

How do you disable this sucker, if it does apply to the sleep when you shut the lid?

From this and your other post, you might check your BIOS power management settings to see if it may also contain a "Wake on LAN" type option that needs to be disabled.

No, that's already been ruled out.

I'm afraid that I do not know what else to try with your particular problem other than the items listed in the tutorial below. Since it is related to the network waking up your laptop, you might post this question with all the details from both posts in the Network & Internet forum to see if someone may know of a solution for this for you.

I hope you get a solution soon,
Shawn

Well, after I re-enabled the "allow the computer to put this device to sleep to save power" on the USB hubs, which a Microsoft specialist working on this problem had disabled, it slept until I woke it up twice. Unfortunately, the third time it went to sleep but couldn't be awakened. Had to hit the power button to turn it off. Curse it!

Vista business laptops wake themselves up from Hibernation

read the response from GerogB...prevented unwanted wake-up from sleep/hibernate for me...

Hey, can this be posted in Seven forums too? I just did it for Windows 7, and did it because I used this same tutorial last year for Vista to allow a program to start via scheduler from sleep mode, and stay running long enough to complete it's task - two minutes isn't long enough for iTunes to start and download podcasts.

Thanks for the great site(s) and great help!

Sure thing. I'll get it added tonight sometime.

This unattended wake sleep timeout is part of windows 7 also unfortunately. If I turn my computer on from sleep and walk away without moving the mouse my computer should not go to sleep after 2 minutes.

darthmowzy said:
This unattended wake sleep timeout is part of windows 7 also unfortunately. If I turn my computer on from sleep and walk away without moving the mouse my computer should not go to sleep after 2 minutes.

That's a bit drastic to delete your power plans, when you probably could have changed the power plan settings to never Sleep instead. However, as long as it works and your happy with it though.

I deleted the setting not the profile. Ive looked for another way to eliminate auto sleep after unattended wake but I haven't found one.

Other than what you did, the usual way was to set a high enough wait time that you would be active on the computer before it reaches thatm to effectively be the same as disabling it.

Thank you for sharing it.