How to Make a "Create System Restore Point" Shortcut in XP, Vista, Windows 7, and Windows 8​

Information
This tutorial will provide you with a create a manual system restore point shortcut that will instantly create a restore point with an optional description and success message in XP, Vista, Windows 7, and Windows 8.

This will work for 32 bit and 64 bit Vista. You must have System Restore and the services responsible enabled for this shortcut to work. If not you will get the error message below when you try to use the shortcut below. See: How to Disable or Enable System Restore in Vista 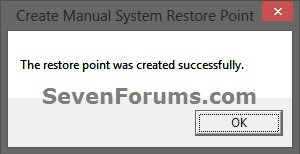 1. For how see updated tutorial here:

Updated the how to create a System Restore Point shortcut to make it real easy to do.


Brink said:
Updated the how to create a System Restore Point shortcut to make it real easy to do.


The instructions on creating a System Restore Point Shortcut are very easy to follow. This shortcut is exactly what I wanted.

Thank you very much!

Your welcome go-to-lady, and welcome the Vista Forums.

Thank you! I almost gave up on finding these types of shortcuts when all people did in some other forum was ask me why I couldn't just go through the steps.

LOL ! Yeah, when you need to create System Restore Points all the time, it can be a pain and time consuming to go through all the steps each time.

Have a great day,
Shawn

Hi Brink, followed your instructions exactly and double checked everything, but......no joy. All that happens is that the file opens in notepad

Could the problem be that, as a lone user, I operate with UAC turned off?

I tested it, and it does not matter if you have UAC turned on or off for the shortcut to work. You only need to make sure that System Restore is turned on for it to work.

Which file opens in Notepad?

Hi Brink and thanks for your quick reply. The file which runs in notepad is "RunAs.vbs. Should I have something else installed to run this file since, looking in Control panel, all .VBS files are associated with Notepad?

That would be the problem. The VBS file extension should have C:\Windows\System32\wscript.exe set as it's current default program not Notepad. While your there, VBE should be set with this too.

Brink said:
LOL ! Yeah, when you need to create System Restore Points all the time, it can be a pain and time consuming to go through all the steps each time.


Why climb the stairs when the express elevator takes you right there! (Former New Yorker!)

System Restore Points are life savers. I create them before every single change, no matter what it is.

Of course I created one right after installing my new, currently most favorite shortcut!

Your welcome beauparc. I'm glad to hear that it is working for you now.

Thank you for the feedback.

Does anyone else get an error if they cancel the restore point operation?

You can click OK to clear the error and cancel the restore point creation. It is a part of the shortcut that I do not know how to prevent.

NOTE: If you close or click Cancel instead, you will get a error message. Just click OK after the error and it will close without creating a restore point.

Updated to have the shortcut work even better.

Hello to the group!

I was referred to this forum by the owner of another technical forum.
So far, so good.

I just have one problem with the "Create Restore Point" script as given earlier in the forum.
To be ultimately useful, the script should be able to run from a batch file or Startup folder without operator intervention.

In XP, I set such an automatically running script in my customers "Startup" folder, to that they get a new restore point every day when they first start up their PC.
Heck, I even set it up that way on my own PC.

I've seen way too many PC's with NO restore points being made for weeks on end.
Then something happens when I need to take the PC back maybe just a few hours or a day or two....and #%[email protected]#&, there's NO restore point to go back to.

Having the script run automatically from the Startup folder takes care of that little problem. There's always a fresh Restore Point when I need one.
I test so many pieces of software every week, that I rely heavily on my restore points to "Back UP" when something doesn't work properly.

The script as presented in this thread is a great little script, but, it forces operator intervention. Not good!

I've found that the one I used for XP, works just fine for Vista as well.
The writer was somewhat of a jokester and every point is labeled "Hacked The Registry".
Well, it does stand out among the other restore points, so I just left it that way.

I'd gladly post the text of the script here.....but I'm not sure that would be appropriate.

Thanks guys, for a great site!

Thanks Shawn,
Well you know us "Old Timers",,,, we're kind of creatures of habit and sometimes march to a different drummer.

If just one Beer will kill your thirst, Two Beers will make you feel good.

I guess I just don't trust the Task Scheduler to give me the Restore Point I need, when I need it. And the task scheduler will give me just one Restore Point a day, even though I may restart my PC six times a day and test six different programs, that can screw up my PC.

Also, I'm not your average bear.....I run my computer a bit differently than most.

I actually back it (C: ) up with Ghost 2003 at least once a week, and sometimes twice or more, depending on what I'm doing.

From my DOS boot floppy disk, CD or Flash Drive, I can run NTFS4DOS and then run several batch files that delete my Pagefile, old restore points and all temp files and other garbage files, before I actually run Ghost.
On my PC, that eliminates about 3 gigs of pure crap from ever going into my Ghost Backup Image File.

So, all those extra Restore Points that I'm making get the axe during the Backup process.
You don't need restore points when you've got an entire backup of C: , "In the Can".

Anyway, since you said it's OK, here's my script to force a Restore Point.

I thought the "Hacked the registry" comment, from the writer of the script, was kind of cute, so I just left it in.

( No, I'm not the original author! )
That comment inside of quotes and in Blue, can be edited to what ever you like.

Besides, putting this script in my root directory and a shortcut to it in my "Startup" folder, I made another shortcut to it and put that in my 'Quick Launch Toolbar' so I can make a "Quickie" Restore Point whenever I want to with just one click of my mouse. NO Operator Intervention Required!

It's a bit shorter than the other script. And even though written for Windows XP, it appears to run OK on Vizduh. Most systems, anyways.

Thanks again guys!
The Shadow

Thank you The Shadow for posting the script. I'm sure people will find it useful.

LOL, I make so many backups it's not even funny with all of the experimenting I do.