OK this one has me stumped. Wordpad runs fine, in fact everything seems to run fine but after running system file checker it tells me I have corrupt files and has successfully repaired them, but then Wordpad fails to start."entry point not found" and an error in ole32.dll
System restore returns Wordpad to a working state again.
Any ideas please

Hello ilikefree. I can only tell you that the last version of WINDOWS\System32\ole32.dll specifically for Vista was: 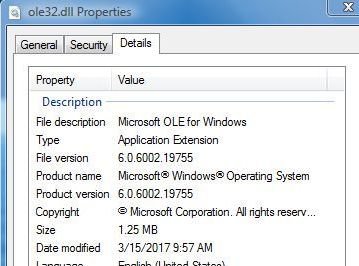 It was last analyzed at VirusTotal on 2019-10-22. If you never patched Vista to EOL due to the well-known Windows Update issue, then you would have an older version of ole32. I wonder what file(s) are reported as repaired in the CBS log.

My file version is 6.0.6002 24078
It worked fine before sfc/ scannow but after entry point not found
System restore fixed it, sort of
I will look into the scan logs tonight

Receiving an Ole32.dll Error? Here's How to Fix It

A troubleshooting guide for ole32.dll is missing and similar errors. Don't download ole32.dll; learn how to fix the problem the right way.

What is its "Date modified"? If you upload it to VirusTotal, does it match a previous submission?

I'm still curious about the "Date modified." Have you installed any Windows 6.0 updates earmarked for Server 2008 SP2 since April 2017? System restore probably obliterated the CBS log.

I just remembered that sfc /verifyonly scans for corrupt files without attempting repairs, which might be useful in your case.

Vista Guru
Gold Member
I did a search on the file version for OLE32.dll which ilikefree says he has. I found this-

Might be worth looking to see if the referenced update is installed.

wither 3 said:
I did a search on the file version for OLE32.dll which ilikefree says he has...
Click to expand...

After some head-scratching, the explanation is that I looked at ole32.dll in System32, whereas ilikefree looked at the same filename in winsxs: 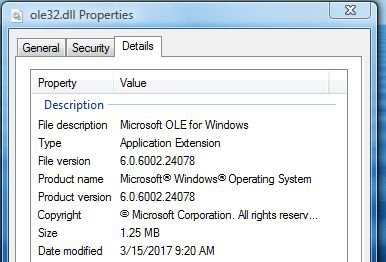 So ilikefree and I actually have the same version, and we are getting nowhere with solving his issue.

By the way wither 3, how has Windows 6.0.6003 been working for you? Any black screens or broken software? I wouldn't expect any.

My file was in system32
Will look at the link given, thanks 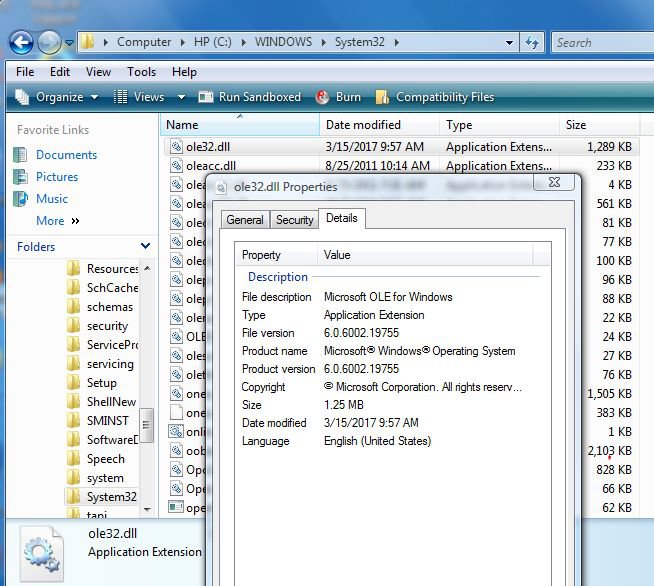 I would still suggest running sfc /verifyonly and studying the CBS log before taking any action. In case you wonder, it does not find any integrity violations on my Vista x86 system: 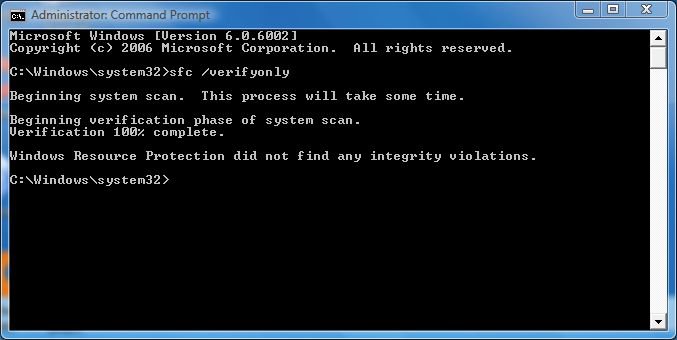 One possible course of action might be to uninstall KB4014793 from Installed Updates, check System32, then reinstall the update. Another might be to manually replace 24078 in System32 with a copy of 19755 from winsxs (it can also be found there). (Edit: Scratch Plan B.) Good luck!
Last edited: Jan 5, 2020

OK I uninstalled the update KB4014793 and my ole32.dll file version changed to 23936
I ran sfc /scannow and no integrity violations were found
Wordpad is still openinmg so problem fixed
No idea why an update installed in August should start causing problems now but all seems well now
Note my file version is not the same as what you have

Vista Guru
Gold Member
isn't that special. When I look for that version of ole32.dll, I get this-

ilikefree said:
OK I uninstalled the update KB4014793 and my ole32.dll file version changed to 23936
I ran sfc /scannow and no integrity violations were found
Wordpad is still openinmg so problem fixed
No idea why an update installed in August should start causing problems now but all seems well now
Note my file version is not the same as what you have
Click to expand...

If you uninstall an update that installed a newer file version, then you should of course end up with an older file version. I have no idea about your issue either, and only focused on ole32.dll because it was the only detail in post #1. (If I had your issue, I would want to look at a CBS log.) CVE-2017-0199 (addressed by KB4014793) did affect WordPad as well as Microsoft Office. It occurs to me that there could be some legitimate reason why we did not have the same file version in System32. I wonder what would happen if you reinstalled KB4014793.

I might make a restore point and do that later tonight