Synopsis
This will show you how to restore the built-in support of ZIP files in Vista by restoring the ZIP file association.

How to Restore the Built-in ZIP File Support in Vista​

Information
This will show you how to restore the built-in ZIP file support in Vista by restoring the ZIP file association.

Note
You may have used a program like WinZip, WinRar, or some other Zip program and Vista will now not go back to it's default Zip handler in explorer after you uninstalled the other program.

Tip
If when you try to open a ZIP folder and it does not open in a Windows Explorer window, then turn on Compressed Folders. See related link below for how.

​
1. Click on the download button below and save the zipfix_vista.reg file to your desktop.​
NOTE: This also contains the reg file to turn on Compressed Folders.​
​ 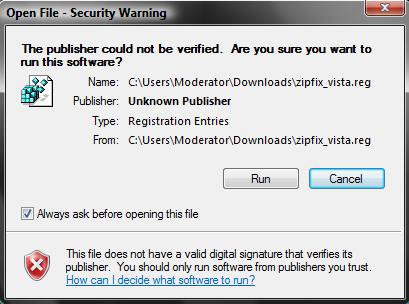 A Restore the PC to its original condition with the HP Recovery Manager from within Windows Vista is what i tried about a week ago, I tried from the machine hard drive and from the recovery disks i made when i got the computer, it did not get over the zip problem. thats when i started to ask you about my zip opening problems.
ive seen a program called REGISTRY MECHANIC do you thing this might help
JOHN

If it is still like that right after a factory restore, then you might look to see what programs have came installed with the computer to see if one of them may be the cause by uninstalling it.

Just so that we may be able to see if we can find a possible cause of this, do you remember running anything (ex: registry cleaner) before it stopped working properly?

See if doing a System Restore using a restore point dated before this problem may be able to help.

if i do a systen restore it only goes back 1 week to when i done a factory reset, the zip opening problem was the same before and after.
I think im going to have to put up with the problem and just use 7zip to open my zip files, at least i can open them with somtheing.
JOHN

Was it like this right after a factory reset as well? If so, then one of those included programs that came with the OEM Vista version may be responsible.

7-Zip is a better zip handler though.

Hi. I've been driving myself crazy trying to get ZIP files working in Vista after installing and uninstalling something which nuked all the correct associations. I've read this thread over and over and tried all the registry merging etc but kept getting "Application not found" when trying to open a ZIP file.

However, after some poking around on my desktop PC which ZIP files were working fine on I managed to work out what was causing the issue and thought I'd post it here in case it helps anyone else out.

Anyway, after a bit of rummaging through both registries I noticed that my laptop had an extra key that my desktop didn't have:

I backed the key up and then deleted it from the laptop. Voila! ZIP files working just as they always used to! Woo hoo!!

Anyway, thanks for the .reg files here as I think they solved most of the problem but for anyone who's used them and is still going mental trying to work out why ZIP files aren't behaving, have a look to see if Open isn't your default option.

Strange that location should not be there by default. I have updated the reg file download for this.

I'm not sure where the extra key entry came from, I think it might have been due to me trying lots of different remedies to fix the ZIP association. I noticed that someone else had the same problem as me a few pages earlier on ("Cannot find application" or similar) which is how I found this thread in the first place. Anyway, all fixed now... cheers

I'm happy to hear you got it sorted though.

Brink
when i right click zip folder I dont get compressedfolder at the top I just get OPEN then EXPLORE like richi had.

Im a bit lost in what richl changed in his registry a bit to hard for me.
but you say you have updated the reg.fie What reg.file ,and were do i down load it from.

It will just be the same download in step 1 of this tutorial to get the updated reg file.

ive just downloaded the reg.file and ran it, still the same problem.

I'm sorry to hear that. I'm nout sure what is still causing this for you, but I guess it's still 7-Zip until the next reinstall then.

i am trying to correct this problem but when i go to download the file it wont download and leaves me with zipfix_vista.download file which i cannot download
i have also tried the other link to restoring the default vista file extension type association but this leaves me with the problem of being unable to unzip the file as it comes up with adobe reader

anything i can do?

I changed the other link to be a REG file instead of a ZIP.

Are you getting a error or message for why you cannot download the REG file here? Sometimes a antivirus program may block it. You might temporarily disable it to see if you can download it afterwards.

Hope this helps for now,
Shawn

OMGosh Brink you are a total life-saver. I somehow got my setting changed on opening zip-files to my PhotoShop Elements program and spent over 3 hours

trying to find how to fix it, when I happened upon this thread thru a Google search. I downloaded the link on how to restore the zip file support and I'm now back in business. I've bookmarked this site so if I have any other problems with my system in the future, I'll know where to go first.

Thanks so much for your easy to understand tutorials for those of us that don't have a programing degree! :D

You're most welcome Teri, and welcome to Vista Forums.

sorry about my stupid post
i was using a different web browser like an idiot haha
thanks for the fix tho
amazin and very helpful now i can use it again
thanks a lot :D

You're welcome Laurence. I'm happy to hear that you got it sorted.